This Guy Gets Around: Bigfoot Spotted in North Carolina

Are Vampires Real? Ancient Graves Might Reveal the Truth

This Guy Gets Around: Bigfoot Spotted in North Carolina 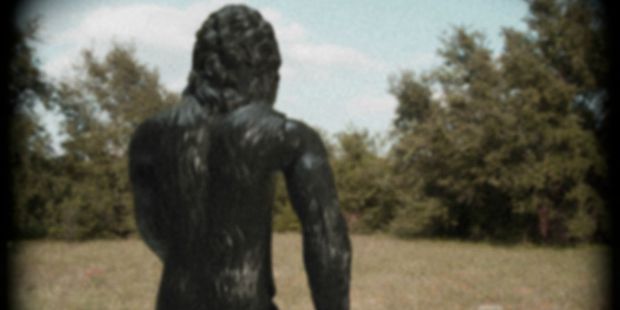 Oh my god….HE’S BACK!!! America’s favorite furry monster strikes again. A few weeks ago a North Carolina man named Eric Walters caught Bigfoot on video while walking his dog, according to the San Diego Union Tribune.  The viral video started off with Walters proclaiming “Oh my God, Oh my God,” then “No, Zippy No!” after his dog runs towards a shadowy figure on the other side of the road. Oddly, the creature was walking through waist-tall vegetation instead of on the road, and then quickly advances away before vanishing into the woods.

Walters told ABC 11 he originally thought it was a bear, but, “I quickly realized it was not a bear but a Sasquatch.” Apparently Bigfoot doesn’t just reside in the Pacific Northwest, but also in the Southeast United States.

According to the North Carolina Bigfoot website, there have been numerous Bigfoot sightings in the Tar Heel state. A Feb. 17 post on the site said, “Witness reports observing an unknown creature from a distance of about 150 feet walking on a steep hillside near his apartment complex. He described the creature as tall with medium brown shaggy hair and moving on two legs. The witness says that the hill would be too steep for a human to traverse with such ease, and that the creature’s presence frightened his 75-pound pit bull to an extent he had never seen before. While he admits that the nighttime sighting prevented clear identification and that he could not be sure as to what he saw, he was ‘pretty sure’ it was not a human or a bear.”

Sasquatch certainly gets around. Let’s examine the other sightings of the prolific hairy beast from all over the country. According to the Bigfoot Field Researchers Organizing (BFRO) – yes, this is a real thing.

The top 10 states for Sasquatch encounters are:

Conferring to the BFRO findings, Bigfoot is not limited to a certain geographical domain. But many of these states seem like questionable hiding places for Bigfoot, especially Florida, maybe he needed a tropical vacation from the cold? There has to be some order to the madness, and people have come up with some very creative theories as to why Bigfoot seems to be everywhere, all at once.

Here are the top 10 scariest Bigfoot sightings in history:

This short clip was filmed on October 20, 1967 and is perhaps the most famous and studied Bigfoot film to date. The discovery has been unresolved, though filmmakers Roger Patterson and Robert Gimlin have consistently repudiated claims they faked the video by filming a man sporting an ape suit.

A Utah resident took this footage he says shows a Sasquatch confrontation on October 30, 2012. “On our way up, we thought we saw a bear, until the monster stood up and looked right at us,” he wrote on YouTube.

A video filmed by a 27-year-old Polish man by the name of Piotr Kowalski reveals a large, hairy creature wandering the Polish woods. Bigfoot sightings in Poland have grown in prevalence as of late, particularly in the Tatra Mountains.

In July of 2000, 15 hikers staggered across a supposed Yeti nest. Marble Mountain Bigfoot.

This gigantic 9- to 10-foot tall Yeti was fortuitously recorded by student Noah Wiley at Prince Edward Isle. This is one of the only clips showing Bigfoot running on all fours.

An Auburn Sasquatch swings from tree to tree. “Remarkable, human form, long legs and arms, yet unbelievable ability to climb,” says the video uploader SasquatchWatcher. “This is clearly no monkey.”

A dissection the Ukrainian video of the “Crimean Sasquatch.”

Three clips of Florida’s Palmetto Grove Sasquatch that, according to the source, depict gait, palm color, and dexterity of the elusive beast.

We’ve all seen the Startled Panda video, but what about Startled Sasquatch? This clip shows a stunned Yeti watching a father teach his children how to shoot a gun in an unknown location.

Bigfoot seems to be everywhere, except in actual clear view.  Even Les Stroud of the Survivorman tv series claims he has encountered bigfoot.

Who else believes in Bigfoot? Have you ever experienced a Bigfoot siting?

Zara is a freelance writer and filmmaker who has worked for numerous magazines and news sites. When not coming up with puns or writing screenplays, she enjoys having blind children read to her and donating plasma TVs. Follow her on Twitter: @zarazhi